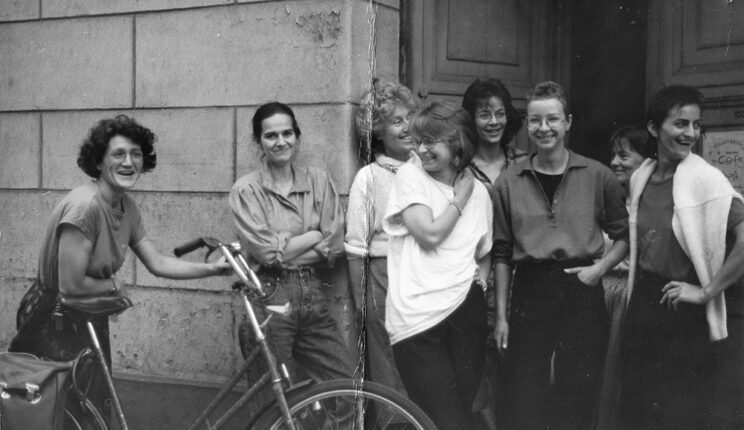 Opening of the café in the women’s center, July 6th,1990 © Jeanette Toussaint

“We thought we could turn the world upside down. The Independent Initiative of Potsdam Women (1989 to 1995)”

“We thought we could turn the world upside down,” recalls one of the founders of the women’s initiative. Political work, election campaigns, work, family… Where the energy came from to master all of this still amazes those involved to this day.
From August 26th, 2022 to January 8th, 2023, a special exhibition at the Lindenstraße memorial honors the political commitment of women during the Peaceful Revolution and the period of transformation, using the example of the independent initiative of Potsdam women.

The initiative was founded in December 1989. From January 1990, together with other groups of the citizens’ movement and newly founded parties, the group was based in the former Ministry for State Security (Stasi) detention center in Lindenstraße. With their commitment to legal, social and political equality for both sexes, they were involved in the development of democratic structures in Potsdam as well as in the state of Brandenburg.

The founders of the women’s initiative had already acquired the necessary tools for democracy, for example in the non-governmental working groups, solidarity, church and feminist theology. The exhibition follows the development of the group and the resulting projects. Among the best known are the Autonomous Women’s Center Potsdam e.V. and the Girls’ Club Zimtzicken. Selected biographies show what motivated the women to get involved. With films, photos and interviews, the exhibition takes a look back at the eventful years. But what is the result of this awakening and what has become of the gender-political demands from this period?

An extensive accompanying program with readings, film events, discussions, city tours and workshops for young people expands one’s understanding of selected topics from the exhibition while at the same time broadens their view to new aspects of the women’s movement.

An exhibition by the Lindenstrasse Memorial Foundation in cooperation with the Autonomous Women’s Center in Potsdam.